Notebook 3: 3A, A Letter To Adriana (telling someone about my writing.)

I’m writing to tell you about my writing project this week for English. I remember talking to you about having a hard time deciding which social issue I was going to cover. I decided to research the right to have Education Equality. This week in particular, we are writing profiles on important people that are somehow attached to our social issue. I am going to write about Ruby Bridges. If you look up the painting from Norman Rockwell called, “The Problem We All Live With,” you’ll notice a little girl being escorted by U.S Marshalls on her way to school. This was a real person in the 60’s, as a matter of fact, she was the first African-American student to be integrated in to an all white school. It’s important for me to include the moment her parents decided that it was the right thing to do. Ruby’s father was hesitant, but her mother’s argument points were that Ruby was going to get a bette education, and that this was going to open the door for other African-American children to attend these schools. Can you imagine how scary it would be to send your child to a school where she was definitely going to be hated? Can you imagine what Ruby felt, and yet the courage that these parents and Ruby showed in the type of courage I don’t I’ll ever know. I also want to my readers to know, that in my profile about Ruby, I plan on covering what happened following this monumental day, and what she’s doing with her life now. They’ll be happy to know that she is a Philanthropist, who has written a book (Through My Eyes) and is the chairman for the Ruby Bridges Foundation. Maybe when I finish my final profile page, you can read it and tell me what you think! 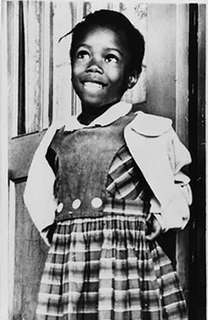 For this letter to my sister, I chose to focus on just the character of Ruby Bridges. I chose to first tell her about my social issue I’m covering, then I wanted to tell her about the important person I’m writing my profile on, then I wanted to tell her a little bit about the main even of Ruby’s life that changed history, and then finish it with what Ruby is doing these days. I didn’t think it was important to go in to detail about the harassment Ruby experienced that day, and how all the parents, with the exception of one child, pulled their children out of their school. I instead asked open ended questions for her to imagine what that day was like for Ruby.